The real story of Romeo and Juliet, a sharp bipolar division

|In Romeo And Juliet Essays
|By Alex Righetto

“There is no world without Verona walls,
But purgatory, torture, hell itself.
Hence-banished is banish’d from the world,
And world’s exile is death…”

When talking about Romeo and Juliet, there is a related tale that is very mysterious and fascinating.

It involves power, scandal, and homicide.

Intrigued? You should be…

This can also explain the current situation we are living in. The world seems to come to a bipolar division.

Who believes and who doesn’t. This pattern is very recognizable and sometimes extreme!

Let’s turn back the clock 700 years, and do a time travel together where you come with me to Italy!

It’s 1200 a.c. Middle Age. No internet (of course! lol). The quest for power never stopped through the history of man.

100 years before the contest of Romeo and Juliet something that should not happen, happened.

A man named Buondelmonte (( https://en.wikipedia.org/wiki/Buondelmonte_de%27_Buondelmonti )) lays on the ground, in the city of Florence. Dead.

The atmosphere is explosive, people are angry, and they demand a violent consequence.

Who killed Buondelmonte? Why is he dead?

And why does this matter with today’s times and Romeo and Juliet?

It’s about a wedding that never occurred. 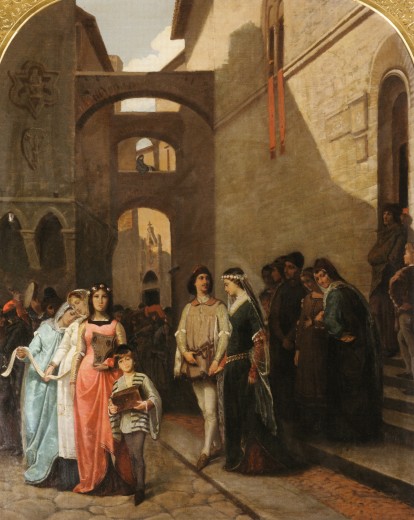 Buondelmonte who was a young rich Italian man refused to marry a woman who was arranged to be his wife from the two families. She was belonging to another political party, an opponent family.

The day before the homicide he married another woman. And it was recognized as outrageous and an insult to the family of the woman that was rejected.

The siblings of the rejected bride prepared the strike. The ambush worked perfectly.

This incident was the spark of more than hundreds of years of riots in Italy.

The Guelph vs Ghibelline(( Check out this link for more info:  https://www.britannica.com/event/Guelf-and-Ghibelline ))  were the two main political powers. The Ghibellines were the imperial party (Roman Empire), while the Guelphs supported the Pope.

At that time the Pope was not only the holder of the spiritual gate to paradise but also the owner of great political power on the ground. Romeo and Juliet’s story starts with the family fighting. But that is what is referenced: the war between The Guelph vs Ghibelline. At that time Verona was supporting the Ghibelline party.

The reference of that fight is the set of the romance between the two lovers. And even if it happened almost 700 years ago it is still relevant nowadays.  We are so sick and tired of these fights.

History will repeat itself over and over again until we learn from it.

As an artist, I not only paint to inspire people but just as the art of the Masters like DaVinci, Raphael, and Michelangelo (the greats who inspire me today) I want my art to tell a story and hold it in history, passion, and impinge on the viewer in a way that forces them to think and hopefully shifts the narrative. It is through art that society can in fact heal.

Romeo and Juliet is my new collection originally presented at Art Basel Miami in December 2021.

So yes, I created these paintings because it’s a relevant story that helps us rediscover treasures from the past and get new inspiration and hopefully culture. I created this collection at this time in history with a desire to continue to open the eyes of the World.

Many people are taking advantage of this offer and to you I am grateful.

Help me spread the message by hanging this art in your home and sharing the story.

Get your print here

Get all the details about this work in one single file! Packed with stunning artwork, this collection is sure to sweep you off your feet. Featuring 30 colorful pages, this catalog is a must-have for any art lover. Plus, the handy QR code makes it easy to explore each painting in detail. So grab your sweetheart and dive into the captivating world of Romeo and Juliet today!

Get to the Catalog of Romeo and Juliet collection. It features 30 colorful pages with all the paintings and the description.

Each painting is accompanied by a detailed description, making it easy to follow along with the story. And don't forget to scan the QR code for even more surprises! The Importance of Arts in our lives If you want to have a meaningful life, read this!

You choose peace or war?

War is never the answer